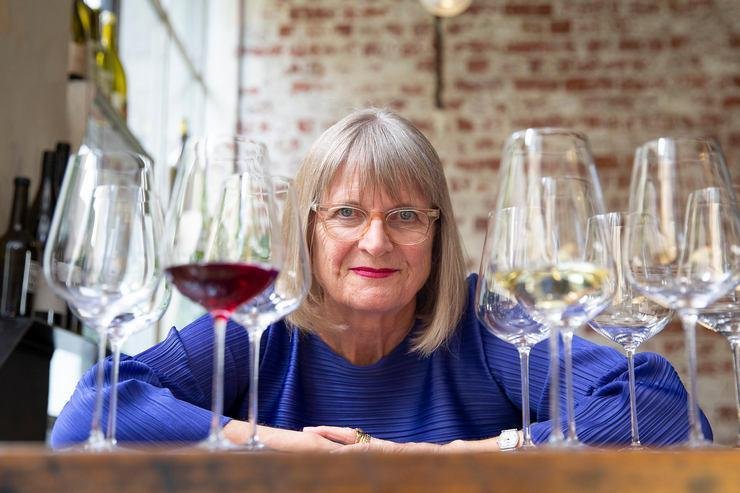 Jancis Robinson has tasted the Ukrainian wines and assessed them under the 20-point scale within the range from Distinguished to Superior.

Recently, we have witnessed an important event, which, at a first glance, may not seem so sensational. In London, Janсis Robinson has tasted a pool of Ukrainian wines (by 46 Parallel, Beykush, and Shabo) provided to her by Drinks+ Communication Media Group. But if one comes to grips with the event, it will become obvious that this tasting is the beginning of a new history for Ukraine, a stepping stone to the top, which every winemaker dreams of.

Let us start with an amazing fact that the stars so luckily aligned, and Mrs. Robinson showed interest in the wines of our country and incredibly promptly confirmed the tasting to us. She contacted the editors of  Drinks + and proposed to us to send for tasting a small set of wines, which are the most well-deserved, in our opinion, in order to represent Ukraine.

And here, perhaps, it is appropriate to remind (well, what if you have forgotten?), who Jancis Robinson is. One of the top wine critics in the world, she has gained a reputation of the most scrupulous and demanding among them. The highest professionalism, uncompromising attitude to quality and sense of humor make many people fear her often ingenious comments, which are published on JancisRobinson.com. Jancis is a journalist, gifted writer, wine columnist of the Financial Times, holder of the Order of the British Empire and the post – which fact particularly appeals to the many –  of Advisor to Her Majesty Queen Elizabeth II.

Thus, you know, what the highest-class expert received the samples of Ukrainian wines, which were to compete with 200,000 other wines from around the world (including the recognized stars) that have been already assessed on JancisRobinson.com. Now, we can admit that expecting the results was quite tense: Mrs. Jancis Robinson’s assessment is not a competition, where the collective assessment is averaged, resulting in avoidance of significantly negative results. The approach of the “Great and Consistent Lady” is the same: veracious and consistent. Nevertheless, it was primarily our confidence in the quality of the wines by these three Ukrainian companies, that warmed us up, and secondly, in our opinion, it was the chance that, if successful, could push Ukraine to the world stage (the verb is used deliberately: we should not remind you, in what condition, generally, our industry is, and how ready the country is to enter the world stage).

And the bold plan was successful: Ukrainian wines performed perfectly! The tasting covered the wines:

The next issue of Drinks+ magazine will feature a detailed story about each of these wines as well as Jancis Robinson’s reviews. We advise those of you who would like to see the results of tastings performed by the leading wine critic and her team, to get an authorized access the site JancisRobinson.com. At the same time, we should warn you that any citations and mentions are governed pursuant to the set of prescribed rules: everything is very correct, but “in strict accordance”, as it has always been the case with Jancis.

Without spinning out the intriguing piece of news: even the most modest points gained by Ukrainian wines – 15.5 points – correspond to a bronze medal of the prestigious competition, and when translated from “the language of Mrs. Robinson”,  mean more than the “Excellent”, approaching the “Distinguished” (16 points). Well, the vast majority of the wines gained the “Distinguished” and above, only half a point missing for reaching the “Superior”. For maximalists and adherents of the 100-point system, who find the scale of up to 20 points not impressive enough, we would like to present a nuts-and-bolts course. If translated into “Parker’s language”, 16.5 points are equal to 88 points. Given that, according to Parker, 80-89 points are equal to “Above Average to Excellent”, whereas 90 points imply “Outstanding”, resulting in our conclusion that the Ukrainian wines are in the upper ranks on the borderline, “5 minutes before reaching the highest rank”. You should also take into account that 100 points is an index of an unsurpassed masterpiece. In other words, it implies the world’s champion who has passed an unprecedentedly high bar. For example, 88 points by Parker were awarded to Château Citran, Haut-Medoc AOC Cru Bourgeois, 1994. The centuries-old winemaking traditions, old vineyards, bright terroirs and exceptional weather conditions are behind such points. Thus, the Ukrainian winemaking, with its mostly young vines, is at the very beginning of its journey. But, according to the observations made by D+, from that moment, the road went dramatically uphill

An important remark which should be made in connection with the event: Ukrainian wines were personally tasted the Great and Consistent Jancis Robinson, as she is called in the wine world. It could happen in an alternate arrangement: it is not a secret that such masters as Robinson, Parker and Suckling have a long time ago begun to personally taste only those samples, which are the most interesting to them, otherwise resorting to the assistance of large teams of tasters, among whom MW dominates. In short, the fact that the Ukrainian wines were tasted by Jancis Robinson personally shows a special interest in our terra incognita vinum. It is certainly honorable and conveys a sense of promise. It should be also emphasized that the positive dynamics behind the Ukrainian wines’ quality, which can be traced in the rating gained from JancisRobinson.com, is encouraging: a few years ago, Kolonist was the only Ukrainian winemaker mentioned on the site (whose wines were defined by many Ukrainians as the country’s best wines) with its maximum of 15.5 points, now, there are four out of six samples by three winemakers, which have gained 16 points and more.

Finally, we would like to present another announcement: in the near future, the Financial Times will publish Jancis Robinson’s article featuring wines of the Eastern Europe. If Ukraine is mentioned in the article among the wine-growing countries, which are worthy of attention, we will consider that a credit for this will go not only to Jancis, but the three Ukrainian winemakers, too. We will also consider our mission to have been performed.