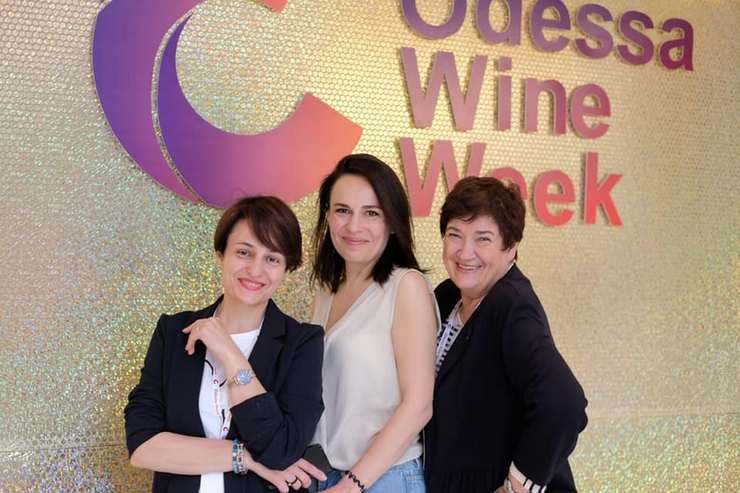 The Odessa Wine Week, the wine event of an unprecedented hybrid format and almost cosmic scale took place for the first time in Ukraine. The week combined exhibitions, a tasting competition, conferences, exposition areas, circular tastings, discussion panels, a gastronomic festival and even an air flight from South Palmyra.

Therefore, the retrospective of the Wine Week has become a long read, for which we feel a slight feeling of guilt in front of our readers. But, believe me, the event was worth it. 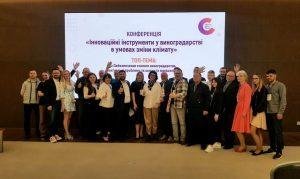 In addition to the scope of the event and the titanic volume of work done by the organizers, the participants were excited by the new name of the tasting competition – the successor, as we understand it, of the “Odessa Bay” – Odessa Wine & Spirit Awards.

The competition within the framework of the Wine Week promises to become the leading one in the country, first of all, thanks to the professionalism of the team, the core of which is made up of the heads of the laboratory of sensory analysis at the Odessa National Academy of Food Technologies. At the same time, the level of expertise of the competition was strengthened by a combination of sensory analysis methodology and the work of a carefully selected jury from among certified experts. The rest of the regulation was almost 100 percent in line with the international rules developed by the OIV. 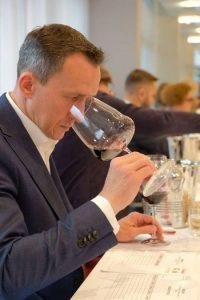 The tasting committee consisted of 16 professional sommeliers and wine experts who in 2 days evaluated 305 sparkling, still, dessert and fortified wines, as well as a pool of spirits from 65 Ukrainian producers. 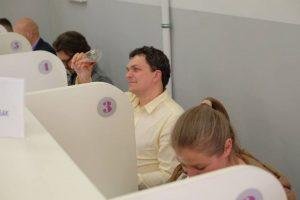 I would like to note the competently equipped tasting area: each judge worked in a separate booth, equipped in accordance with the highest international standards and requirements. To evaluate the samples, the Gustos Life program with blockchain technology was used, which excludes the possibility of changing the assessments of experts both during the competition and after its completion. 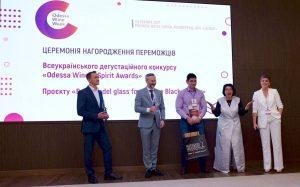 The winners of the competition were awarded gold (86-95.5 points), silver (82-85.99 points) medals and diplomas of the competition participant. It should be noted that, according to the OIV rules, only 30% of the total number of participants receive medals. As a result, 30 samples were awarded with gold medals, 49 with silver in the category of wines; in the category of spirits: 7 – gold and 7 silver medals. 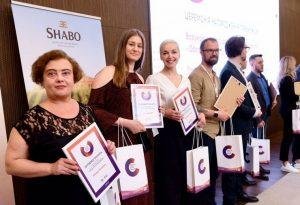 A noteworthy fact that everyone involved drew attention to is a significant number of white wines among the winners.

How can the phenomenon of this year’s competition be explained? With this question, we turned to Oksana Tkachenko, ideologist of Odessa Wine Week and scientific director of the Laboratory of Sensory Analysis, head of the department of the Odessa National Academy of Food Technologies. Her vision of the palette of winners is as follows: “In fact, a huge number of factors influenced the ratio of white and red, it is imperative to analyze the situation. This year, there are many awardees among the white wines, most likely simply because the winemakers paid more attention to them. At the same time, I know winemakers who do not make white wines at all, since it is technologically difficult for them. I think the fact that this time the winemakers were successful with the whites is an indicator of both technological and quality growth”. 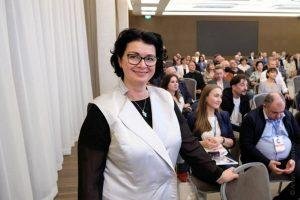 Recall that a similar marketing technique was tested by the flagship varieties of a number of countries: Malbec in Argentina, Saperavi in Georgia, Feteasca in Moldova, Carmenere from Chile, Shiraz from Australia, etc. 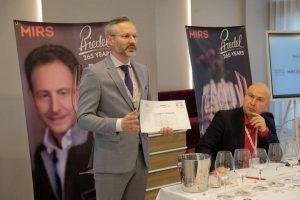 The selection algorithm was as follows. A few days before the start of the Odessa Wine Week, the tasting committee tested 32 wines from Odessa Black, and the winner was named: Aliberne Reserve Limited Edition, 2017 from Gigineishvili Wine House. 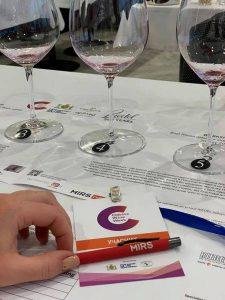 Then the jury, which included winemakers, sommeliers, representatives of HoReCa, chose glass #4 from the Performance collection out of 9 proposed options for glasses. Our Ukrainian autochthon has decided on the ideal form of haute couture – from a world-famous brand! Performance is a fairly fresh collection which is usually personally presented in the world by Maximilian Riedel. This line of glasses was created using the latest technology, thanks to which the bowls have an extended inner surface, which emphasizes the organoleptic properties of the wine and enhances the optical effect. Glasses are made at a factory in Bavaria, but they are not inferior to handmade ones in terms of glass thinness and elegance of forms.

The wine future is in our hands

At the next serious event of the Wine Future Forum in Odessa, international experts and listeners discussed the most pressing topics: viticulture in the face of climate change, attracting investment in winemaking, peculiarities and problems of export, the experience of developed winemaking countries in promotion, etc., where the players of the wine business presented their vision, representatives of the authorities also joined. 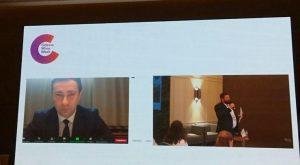 During the video feed, the Minister of Agrarian Policy and Food of Ukraine Roman Leshchenko noted that winemakers should use the successful experience of neighboring countries and work to promote the Ukrainian Wine brand. By the way, the ministry is already actively engaged in in cooperation with the Ukrvinprom corporation on this issue. The minister also listed a number of urgent steps, including the need to abolish the excise tax, the removal of table wines from the list of alcoholic beverages and their inclusion in the food category, as well as the restoration of our country’s membership in the OIV. We hope that the case will not lag far behind the word. Moreover, the other day the D+ columnist, during an interview with OIV CEO Pau Roca, found out that the process of reconstitution of our country in the ranks of this world organization is elementary. 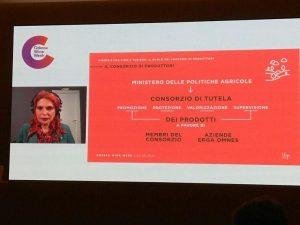 For Drinks+ it was a very honorable task entrusted to us by the organizers of Odessa Wine Week – to attract the most authoritative persons of the wine world to the discussions. Among them, we note such a bright speaker and marketer as Olga Bussinello, a private entrepreneur and ex-director of Consorzio per la Tutela Vini Valpolicella (Italy). In an online presentation, she shared her extensive professional experience in the development, promotion and positioning of the wine region in international markets, including the United States and Asia, as well as how to ethically and effectively coordinate such global processes. 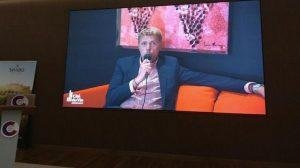 Philippe Massol, General Director of Cité du Vin (Bordeaux), also addressed the audience with a video greeting. His story about overcoming problems during a pandemic and creating a digital marketplace about wine or, as Monsieur Massol himself put it, a kind of “Netflix for wine lovers”, was accompanied by a spectacular video about a unique futuristic wine museum – the center of wine culture. 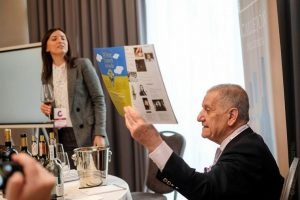 Dr. Ricardo F. Nunez, founder and owner of the Vinos de La Luz group of companies, which unites wineries in Spain, Italy, Argentina and the United States, dwelled on the principles of the wine business in Argentina and government support programs. But, as it turned out, the strength of the Argentines is completely different. Local winemakers – we note, like the producers of most countries of developed winemaking, – are united under the Wines of Argentina brand and jointly participate in exhibitions and specialized events.

The investor is in the details

The presentation “Attracting Investment in the Wine Industry” attracted a particular interest from the community. Winemakers, drowning in problems, rely on investors, which is understandable. This is what Anna Horkun, CEO and founder of 46 Parallel Wine Group, a bright speaker in all respects, who is armed with legal education, and most importantly, her own comprehensive business experience and knowledge of the investment market, spoke about. 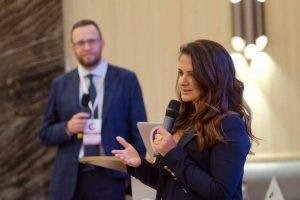 Anna introduced the main work cases, stages, and pain points of investing. And that there are no trifles in attracting investors. There is a need to delve into psychology. “Why do I focus on foreign investment? The way of thinking of foreign investors is very different from how our compatriot thinks. And you need to be prepared for the fact that if you want to attract foreign capital, if you are trying to get an institutional or portfolio investor as a partner, he will come to you with a “Talmud” of strict rules that must be followed.” 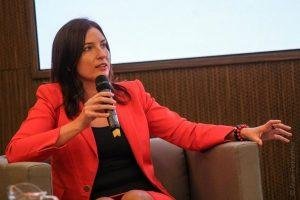 Natalia Burlachenko, brand ambassador of the international group of companies Vinos de La Luz in Eastern Europe, partner of the Wine Gallery distribution company, dwelt on stereotypes and their overcoming: “Ukrainian wines are an independent brand, and they are rapidly entering the path that will soon become successful. However, it seems to me that the underestimation of Ukrainian wine should be eradicated first from our consciousness. We have this ambiguous feeling that everything that is “ours” is of less quality than foreign. In fact, this is not true! For its rehabilitation, Ukrainian wine needs a massive campaign supported by the state. It seems to me that local wine should be associated, first of all, with the personalities of the country and with the locality, terroir”.

The circular tasting from 18 partners and participants of OWW, which took place on the second day of the event, brought together the top officials of the leading wineries. I would especially note the presentation of vintages 2009 “Merlot Vitrimane”, “Cabernet Vitrimane”, “Aligote Vitrimane” from Prince Trubetskoy Winery. 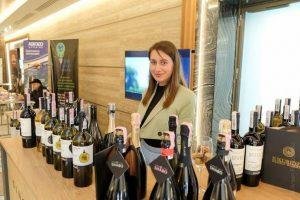 In addition, in a specially designated exposition area for two days non-stop one could taste wines from Shabo, Chateau Chizay, TM “Odessa”, TM “French Boulevard” – and a number of other reputable producers.

The last burst of the Wine Week was the Yes, indeed, Delicious Festival, held in the scenery of the Odessa Film Studio with the participation of leading Ukrainian wine brands, a large food court, a festive menu with a variety of culinary specialties: Odessa, Bessarabian, European and Asian cuisines reigned here. 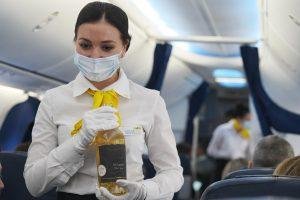 And the enchanting Odessa Wine Week ended with a hot spot: the Odessa-Odessa air travel with a tasting on the UIA aircraft board of the five Ukrainian wines-winners of the Odessa Wine & Spirit Awards competition. They are: El Capitan Pinot Gris 2019 from 46 Parallel Wine Group, Riesling Rhine 2016 from Prince Trubetskoy, Aliberne Reserve Limited Edition 2017 from Gigineishvili Wine House, SHABO Cabernet Grande Reserve 2017. 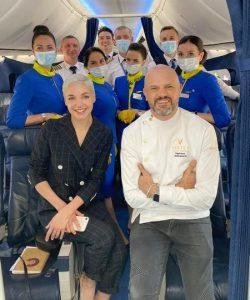 The wines were accompanied by dishes of Odessa cuisine, created by the brand-chef of Le Grand Café at Bristol Hotel 5* Odesa, Stéphane Vaittinadan.

The amazing testing-flight was a landmark that marked the meteoric rise of Ukrainian wines.

Wine design in Ukraine
Opening soon of our website in English