b2b » The backstory  of Asti  Spumante and Moscato d’Asti docg 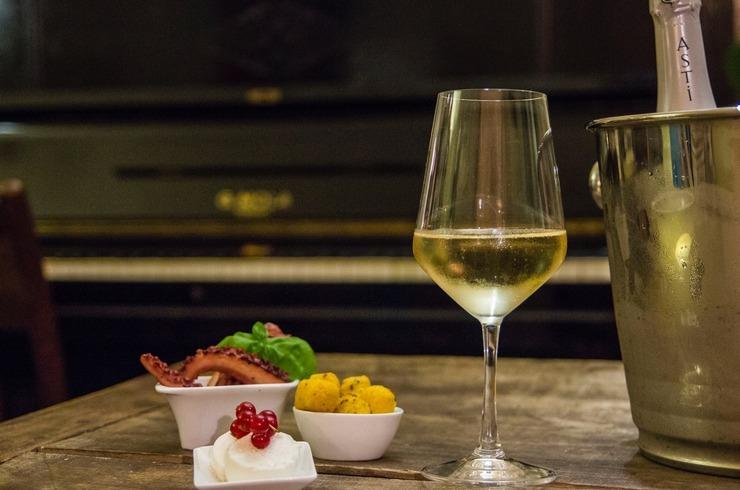 The backstory  of Asti  Spumante and Moscato d’Asti docg

Moscato is one of the world’s most prevalent grape varieties, but the Moscato Bianco varietal, with white berries, finds its ideal expression in Piedmont, Northwestern Italy, in the hills of the provinces of Asti, Cuneo and Alessandria, a unique area famed for its wines. The aromatic Moscato Bianco grape has been with us since ancient times. In fact, mention is made of an excellent “muscatellum” wine in Roman texts.

For centuries, the wine made from Moscato Bianco grapes was consumed mostly by local residents. It was not until the second half of the nineteenth century that a wine made from Moscato Bianco found a national and international market. The credit goes to Carlo Gancia, who took a trip to Champagne, in France, when he was still a young man, to learn how to make sparkling wine. When he returned to Italy, he found the area of Moscato Bianco ideal for making a spumante from aromatic grapes. Gancia applied the techniques he had learned in France – bottle fermentation, i.e. the Metodo Classico – and produced the first Asti Spumante from Moscato Bianco grapes, which in no time found acclaim both in Italy and abroad. 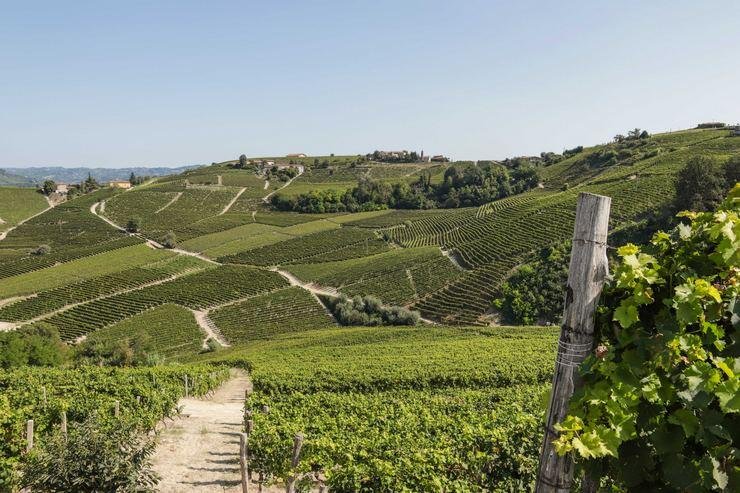 This method was imitated by many wineries in the area, which soon transformed into one of Italy’s most important wine and spumante-making districts. Thirty years later, another Piedmont native, Federico Martinotti, devised a faster and more cost-effective method for making spumante, with fermentation occurring in a pressurized tank, an enormous stainless steel vat that permits greater production volumes in less time than bottle fermentation. The technique is still in use today by sparkling wine producers all over the world. For the “sister wine” of Asti Spumante, i.e. Moscato d’Asti DOCG, domestic and foreign acclaim came with time, thanks to the many winemakers who introduced it in Italy and abroad. Asti Spumante and Moscato d’Asti DOCG show that, thanks to their special characteristics, Moscato Bianco grapes are among the most versatile in the world, ideal for making high-end sweet aromatic wines, as well as wines with less residual sugar, as recently authorized, that can be enjoyed on any occasion and throughout an entire meal. 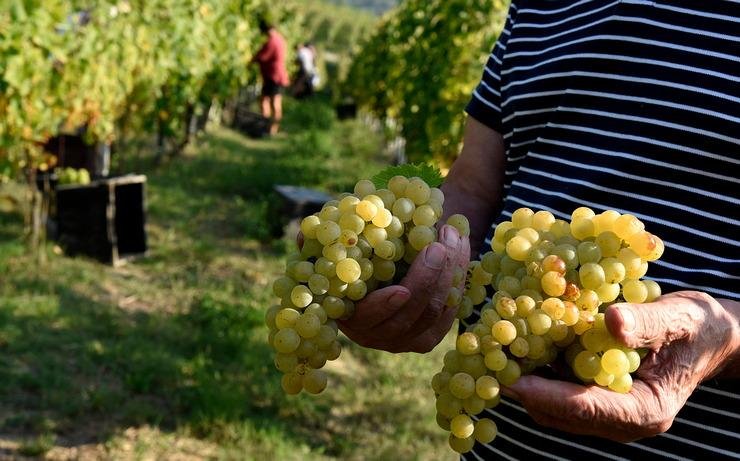 Since 2014 the production area of Asti Spumante and Moscato d’Asti DOCG, along with the winemaking countryside of Langhe-Roero and Monferrato, was added to the UNESCO list of World Heritage Sites, with the other places considered precious to all humanity and thus worthy of special protection. This Piedmont site was the first winemaking district in Italy to receive this honor, thanks not only to the landscape and environment, but primarily to the work of the men and women who tended the vineyards on hills like no others, with a unique microclimate ideal for growing rare and highly-prized grapes that express their original characteristics only here.

The production area of Asti and Moscato d’Asti lies within the provinces of Asti, Cuneo and Alessandria. It includes 51 townships, scattered throughout an appealing area rich in natural beauty, historical sites and art. Ancient hamlets, carefully tended vineyard after vineyard carpeting the hillsides, and woods, orchards and parks, along with towns, castles and historic nature trails make the birthplace of Asti Spumante and Moscato d’Asti one of the destinations most coveted by those seeking itineraries free of crowds, where good food and good wines combine with uncontaminated, salubrious nature. 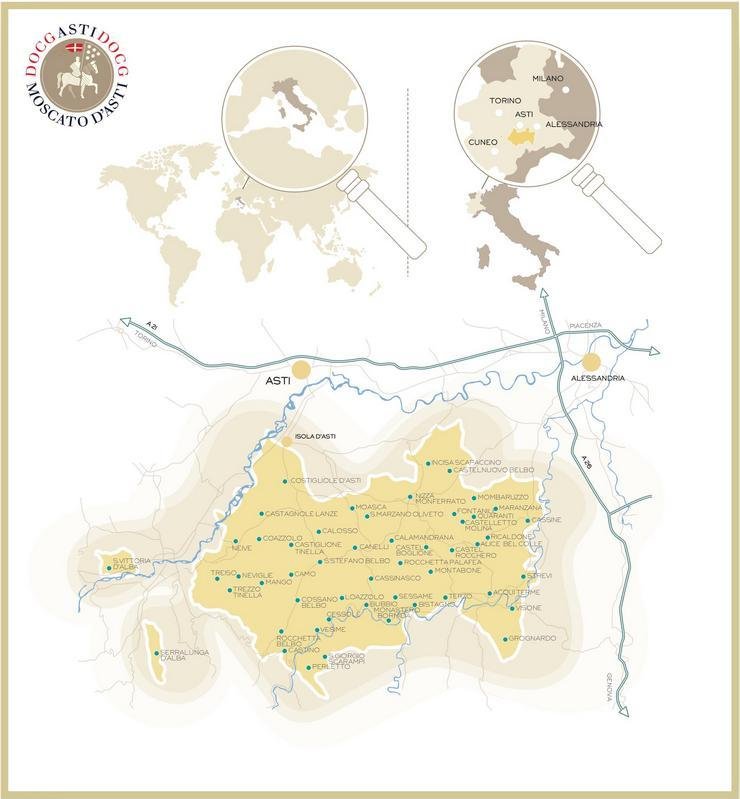 Asti Spumante and Moscato d’Asti were born of the same mother, Moscato Bianco, but they are different because they were raised – vinified, produced and consumed – differently.

The first is a spumante and the second a semi-sparkling wine. The cork is also different: Asti Spumante, like all spumantes, takes the mushroom cork, held against the neck of the bottle by a special “wirehood” made of twisted metal wire.

Moscato d’Asti DOCG instead takes a classic straight cork, like those traditionally used on all wine bottles. Recently, it should be noted, Moscato d’Asti has also adopted the screw cap. 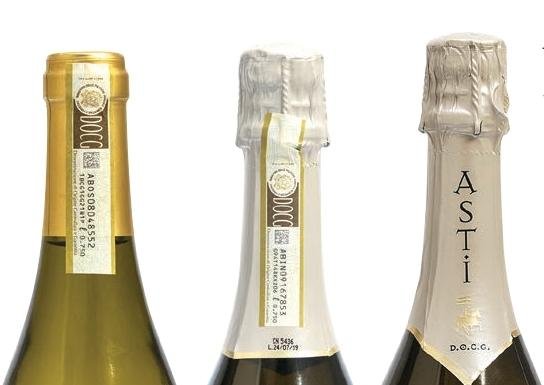 The bottles are different, too: the Asti bottle is thicker, because the internal pressure is higher than in Moscato d’Asti DOCG, and because of the production process. Some of the smaller producers of Asti Spumante still use the Metodo Classico, with bottle fermentation, but the method favored by most wineries is the Martinotti Method, in which temperature-controlled fermentation occurs inside large stainless steel vats called pressure tanks. In these, by adopting a cold chain process, must fermentation is controlled, and all the steps for the secondary fermentation, right up to bottling, occur in the tanks. Asti Spumante is ready just a few months after the wine harvest, ensuring unique freshness and fragrance. Pressure tanks are also used to produce Moscato d’Asti DOCG, along with the cold chain, but since there is no secondary fermentation, as Moscato d’Asti is not a spumante, even though it is characterized by an inimitable light and natural effervescence.

How to recognize Asti and Moscato d’Asti docg

Authenticy and uniqueness for  Asti spumante and Moscato d’Asti docg are guarantee by the State seal DOCG (Denomination of Controlled and Guaranteed Origin),  affixed to the neck of each bottles.  The State seal certified by the alphanumeric acronym with which it is possible to trace the entire productive row and to contrast adulteration.