Главная » Винные дороги » Give Me a Place in Tuscany – and I Shall Repair the World! 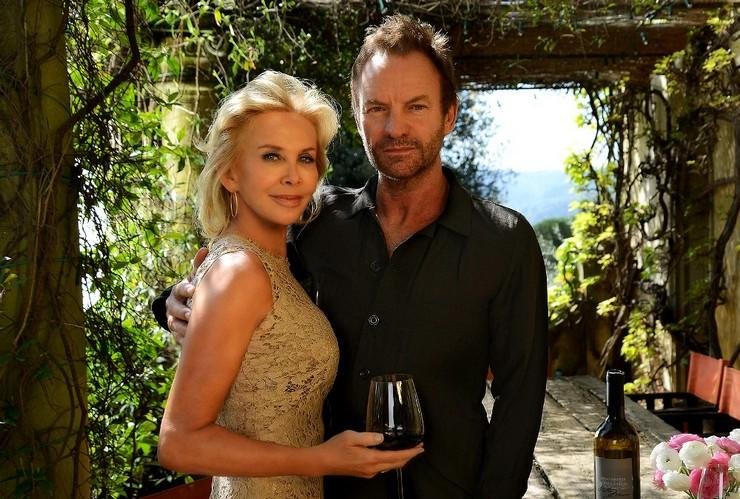 The Tuscan Tenuta il Palagio villa attracts attention of the global community due to various reasons. First, it is scenic in the best traditions of the region – an ancient building of the XVI century, surrounded by gardens, olive tree groves, ponds and bee caps. Second, this estate produces some very good wines, even biodynamic ones. Third, since 1999 the villa has been owned by musician Sting (the stage name of Gordon Matthew Sumner) and his family.

Generally, you can do anything if you pay for it. Even Sting experiences difficulties maintaining a 350-hectare estate – not even the sale of expensive wines produced here can cover enormous taxes. That’s why Sting and his wife Trudy practically jumped on to natural economy – fruit, vegetables, honey, wine, sausages, all natural and all sold right here in the local shop. In principle, it was a smart step – one needs to make a living, but, on the other hand, this is all too far from art…

But let’s get back to Tenuta. Since 1700-ies it was owned by the Martelli family, and in 1819 they sold Il Palagio to Countess Carlotta Bardolani, the widow of Duke San-Clemente, and the estate remained in their hands for many decades. In the beginning of the XX century, Duke Simon Vincenzo Velutti di SanClemente enlarged the estate by purchasing vineyard lands and new premises, including grain crop shop and an olive oil press. But even in 1999, when the estate was sold to Sting and Trudy, it wasn’t large enough. That’s why, several years later, the star couple purchased the neighboring lands, enlarging the estate once again to 350 hectares. Now the palazzo with its 20 rooms and a personal chapel stands in a picturesque valley with two lakes, a forest, vineyards and olive tree groves. By the way, Trudy grew up in a farmer’s family and, as evil tongues say, she always dreamed about winning a million dollars in a lottery to purchase an estate larger than her parents’. 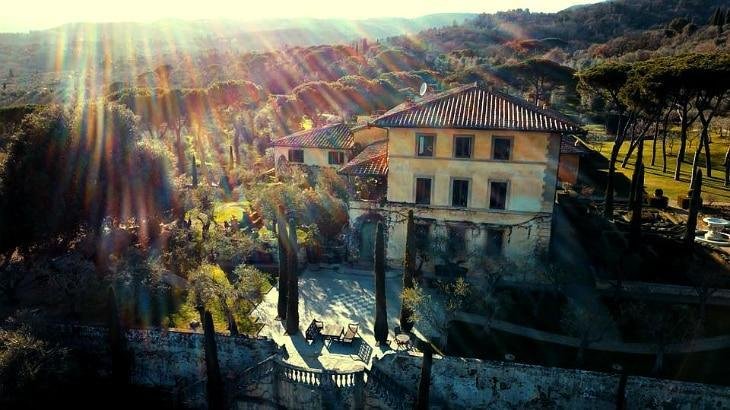 It should be noted that this estate is very special in Sting’s life. He first came to Tuscany after his father’s death, trying to soothe his pain, and worked on an album in memory of his father. After some time, while in travel, Sting and Trudy found a deserted mansion previously owned by Italian aristocrats in a 40 minutes’ drive to the south of Florence. They were mesmerized by the beauty of the valley and peaceful atmosphere of the place. Soon they put their names on the house and the olive oil bottles, the “Familia Sumner”, which they started to make here. Some more time passed, and 200 people gathered in the yard of the palazzo to hear the rock star sing live and record a live album, All This Time. Those friends who couldn’t be there called the musician to congratulate and support him. One of the calls came from New York, an office located on the top floors of the World Trade Center. It happened on September 11, 2001… Stricken with grief, Sting sang just one song and said the sentence that became famous, “The world needs to be remodeled, I don’t know how. I don’t have simple answers, but it needs a repair.”

In short, if the new owners initially planned to just enjoy the nature, with some time they became a part of it.

Since then, Sting has been using all possible ways to change humanity: his charity fund gathered millions of dollars to protect human rights in Chile, he is friends with the chief of an Amazonian tribe (the man even was best man at Sting and Trudy’s wedding) and he arranges charity concerts to save Amazonian forests. Hand in hand with his wife, the singer promotes healthy and organic way of life. Not only they eat at tables covered with natural linen, but their farmlands in Italy are fertilized by manure only (with an accompanying certificate proving absence of any chemicals!). Their cattle (cows, sheep and other domestic animals) eat only grass grown on the local meadows, and the star couple eats only vegetables and fruit grown by their estate and meat of their own cattle. Although, meat is eaten seldom here, and no leftovers are allowed because the animal was killed for food… 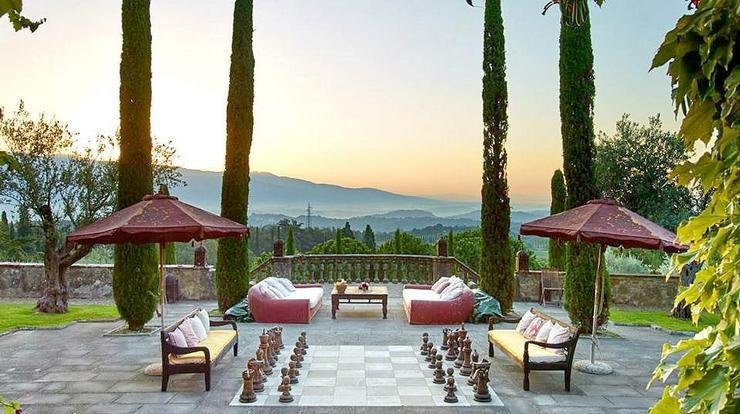 Due to the same beliefs, the couple never wears leather and owns no leather furniture, replacing it with wood and fabrics of bright Mediterranean colors. All bed linen in the house is white. Sting never takes a bath, he washes in a Turkish steam room because he cannot bear the aromas of soap, lotions or deodorants.

In short, if the new owners initially planned to just enjoy the nature, with some time they became a part of it. Trudy
who preferred yoga asanas at first started managing the vegetable garden, and several years later Sting was allured by winemaking. Could wine-making be yet another way to make the world a better place? Still, close friends are sure that Sting has special relations with alcohol.

Don’t misunderstand us, nothing bad happens, but everybody knows that one of his English mansions, the famous Lake House Castle, contains a bar in the style of the 50-ies with respective corkscrews, glasses and shakers. Sting plays a barman quite enthusiastically asking politely from behind the bar, “Whiskey, sir? Soda? Just a minute, sir!” And then he explains in whisper to his guests that it is quite beneficial to be a barman – there is always a chance to have a drink so that his wife doesn’t notice… Naturally, the winemaker position has wine tasting in its job description!

So, the first wine “made by Sting” was released in 2007. He does not work on it himself, of course, he’s got assistants for that: Paolo Cazorgna, an oenology specialist, Alan York, biodynamics consultant, and Paolo Rossi, the manager, who was born in this area.

Today, Tenuta il Palagio produces four types of wine: Sister Moon, Casino delle Vie, When We Dance and Message in a Bottlе. All the names are very poetic, proving the musical past (and present) of their maker. Sister Moon was the name of one of the early compositions by Sting, but the amazing thing is that the name also coincided with the concept of organics and biodynamics practiced by Sting and Trudy. The wine is made from international grape sorts – Sangiovese 40%, Merlot 30% and Cabernet Sauvignon 30%. It should be noted that, along with the international sorts, the estate cultivates local sorts as well, we shall mention them below. As to Sister Moon, this was the first IGT Toscano wine released at Tenuta il Palagio. It spent two years in French barriques. The wine has an incredible aroma of ripe sweet cherries, flowers and liquorice, and it received 93 points from the Wine Spectator.

Casino delle Vie of 2008 received 90 points from Robert Parker. Sangiovese, Canaiolo and Colorino were the “makers” of this wine. It was aged in oak barrels for 12 months and 6 months in bottles. Its name is a casuistry: it can be translated as “a house near the road” or “a mess”.

Sting confessed that he played music for his wines, but didn’t mention what music it was.

Naturally, the first version is more poetic, but the second clearly hints upon consequences. Another wine and another song – When We Dance. This is the cheapest wine among the three, which is also named “an every day chianti”. The price of the only available vintage of 2013 is about 12 pounds (Sister Moon il Palagio 2008 costs 36 pounds, and Casino delle Vie il Palagio 2009 – about 22 pounds). Just like its “sisters”, the wine was acknowledged by wine critics: 93 points from Fine Wine Magazines and 87 points from the Wine Spectator. The sort content of this sample is similar to the previous wine – Sangiovese, Canaiolo and Colorino.

This wine never saw a barrel – just steel tanks and bottle aging. Message in a Bottlе is the last wine in the sort range of the Tenuta. Sangiovese 70%, Syrah 15% and Merlot 15% became the “parents” of this label. They gave the wine delicate notes of spices, wild berries and ripe cherry. This wine aged in barrels – 12 months in French barriques. The price is quite low, too: about 12.5 pounds. Sting confessed that he played music for his wines, but didn’t mention what music it was. 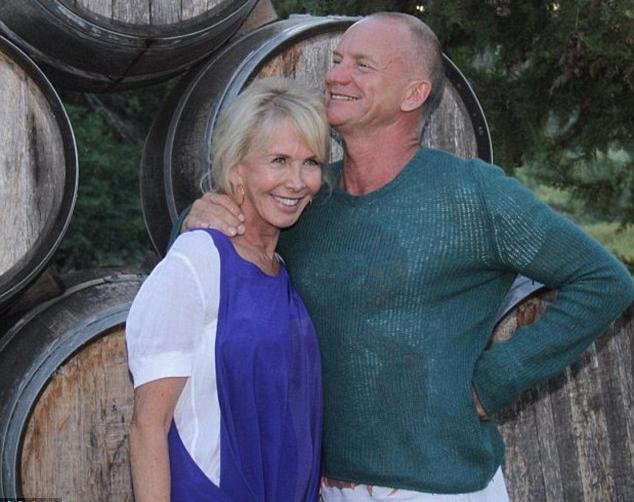 According to the musician’s words, the estate has become his muse, and the wines and olives bring him inspiration. People say that talented people are talented in everything. A disputable statement, but not in Sting’s case. He managed to create not only wonderful music and wines, but even bottle labels which should be especially noted because they look brightly on every shelf. No, there is no picture of Sting in a Siddhasana pose. The label depicts a dancing woman in a black cat suit, wearing pointes and standing on two wine bottles.

Looks enchanting. This is what we see on the When We Dance label, and the Casino delle Vie label shows a man standing on one hand on top of a bottle. The style and plots of these labels are similar, so we can easily place them into one line. Sister Moon looks even more graceful in its simplicity – just some music notes and the name. The design of Message in a Bottle is predictable – the label shows a scroll looking as if it was placed inside the bottle. Looks very appealing, just like the place where Sting hides away from the world which is in a desperate need of a repair today.

Give Me a Place in Tuscany – and I Shall Repair the World!
Запрос на архив предыдущих номеров