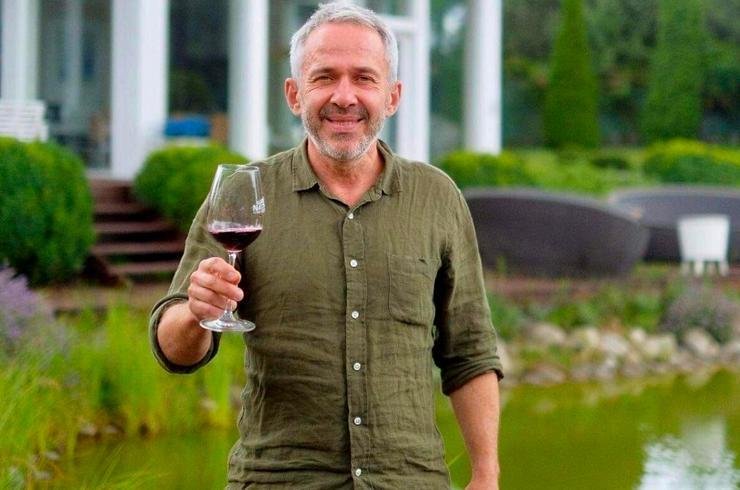 More than 25 years in the alcoholic beverages business, more than 15 years of winemaking experience, love and passion for wine, travel to old classic and organic family wineries in Europe and America – all this contributed to Igor Petrenko’s idea of ​establishing his own winery.

From the very beginning to this day, the motto of Biologist craft winery and its owner has always been the same: “Maximum quality with a natural approach to winemaking”. Undoubtedly, it is Igor Petrenko who is a chief winemaker and ideologist of Biologist, but consultants Masha Skorchenko and Tanya Zinkevich are also engaged in the production. 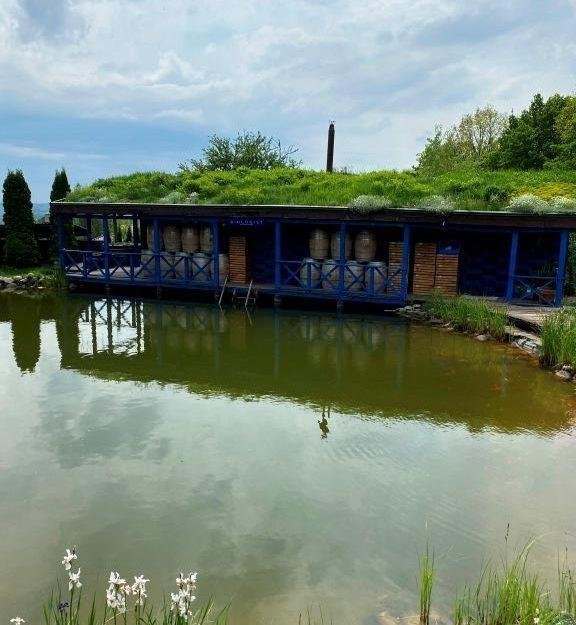 Today, Biologist’s line includes white, rosé, red and orange wines: Aligote, Chardonnay Orange, Rose Pinot Meunier, Odessa Black, Merlot, Pinot Noir, and Rkatsiteli Orange. White and red wines are aged from 3 to 9 months in an oak barrel. “French and Ukrainian barrels are used in the production process, and both have an interesting effect! – Igor Petrenko says. – The team at Biologist is always on the lookout for new flavors and blends. I would like [to produce] more interesting and distinctive wines! Therefore, an experiment is our way to get an original, new and inimitable wine”.  The winery’s annual volume is about 10,000 bottles.

The winery is experimenting with stamp and wild yeasts, using one grape variety, which, according to the producers, gives an interesting and unexpected result. Biologist craft winery is in constant search, movement, and continuous creation process. Igor Petrenko says that in their narrow circle they call Biologist craft winery “a scientific center for experiments and research”. And it is indeed so! For example, at the present stage, Biologist’s team is learning how to make orange (amber) wine and testing the process of production of Pét-Nats, and plans to master the production of such wines as Amarone. In addition, they have been experimenting with labels: “On one label, we tried to display our fauna (we have a huge number of butterflies in summer), and in the second series, we decided to reproduce the main participants of the process in a cartoon format,” – the winemaker says. 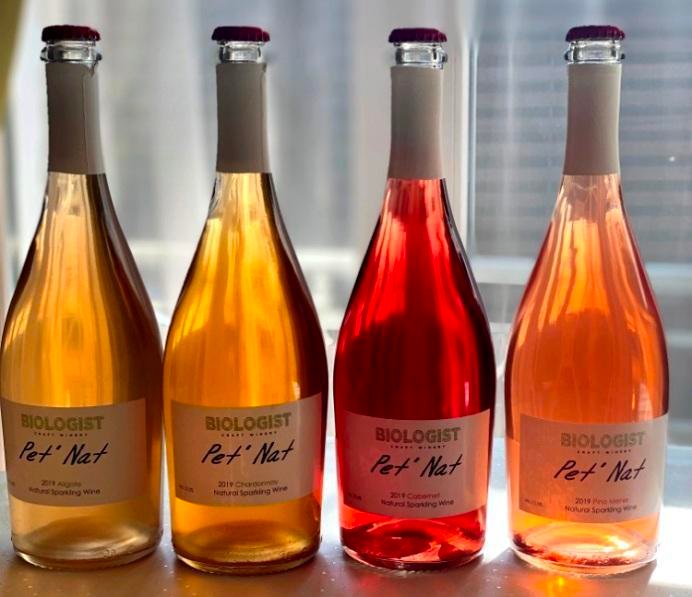 Biologist winery is equipped with everything necessary for vinification, but special attention should be paid to the “smart refrigerator” that is individually designed and capable of maintaining the desired temperature (heating or cooling), which, according to the producers, is extremely important.

Most of the vineyards (13 hectares), which are located in Odessa Region (Ovidiopol and Bolgradsky Districts), are rented by Biologist craft winery. There, producers are gradually switching to organic processes: in order to strengthen immunity of the vines, they use products of plant and mineral origin. The average age of the vines is 14-19 years. Aligote, Rkatsiteli, Chardonnay, Pinot Noir, Pinot Meunier, Merlot, Cabernet, and Odessa Black are cultivated. 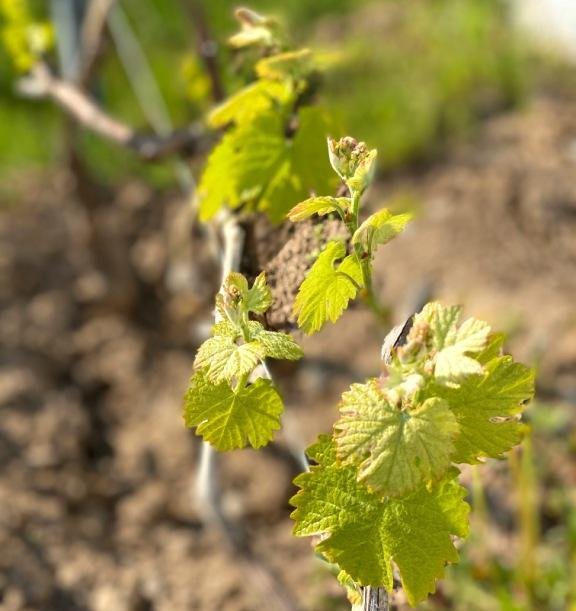 But Biologist craft winery also has its own vineyard, an experimental plot of 0.5 hectares, which is located near Kyiv in the village of Lesniki. “We are gradually developing it, creating new slopes, and terracing it,” – the chief winemaker informed us. “In 2018, we carried out a soil analysis and, on the basis of its results, we have laboratorially selected seedlings in Austria (Tchido nursery and others)”. At the present stage, in Lesniki, such varieties as Cabernet, Pinot Noir, Gruner Veltliner, Müller-Thurgau and others are grown.

Grapes from rented hectares are transported in a refrigerator for about 6-8 hours directly to Lesniki, where sorting out and all further vinification processes take place. “If we talk about time in terms “from the vine-yard to the press”, it takes, on the average, from 12 to 24 hours”, – Igor Petrenko emphasizes.

Initially, Biologist craft winery sold its products through the HoReCa segment and wine boutiques, and only a small part through its website. But during the quarantine, online sales increased. Incidentally, on the winery’s site, products can be bought both in bottles and in sets. The set is more convenient – you won’t have to make difficult choices 🙂 For example, one of the popular Biologist’s sets is called: “I don’t drink, I taste”, and it contains four colors: “Aligote”, “Rosé Meunier”, “Rkatsiteli Orange” and “ Pinot Noir “. Invite friends and taste! 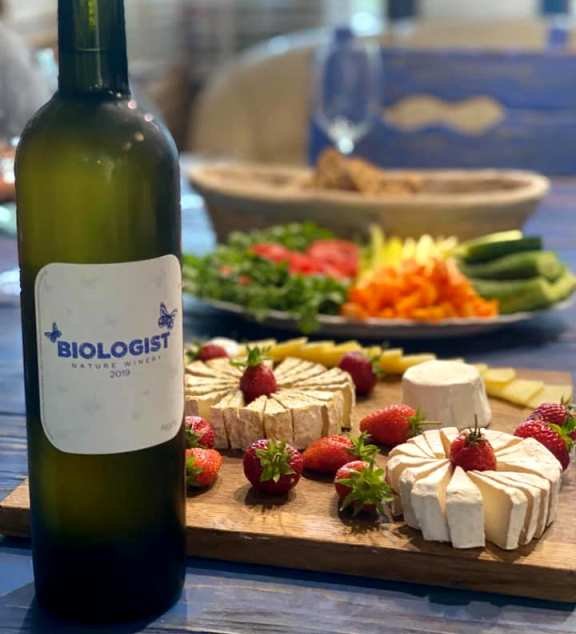 The producers promote their brand through wine tourism, tastings, collaboration with restaurants, customers’ recommendations and social media. “We communicate with everyone offline and online! We are looking for bloggers and opinion leaders, and sometimes they are looking for us”. The winery also opened a tasting terrace at VDNKh (“Exhibition of Achievements of National Economy), Pavilion 6, Biologist Terrace, where it invites everyone to taste natural wines.

During receptions at their winery, producers talk about vineyards, vinification, and conduct tastings. Igor Petrenko’s guests are restaurateurs, sommeliers, cheese-makers, ordinary lovers of natural wine, winemakers and even famous politicians. “Without doubt, these meetings contribute to the promotion, but to a greater extent, we value the experience and communication that we get along the way. In fact, we are expanding horizons!” – the winemaker says. 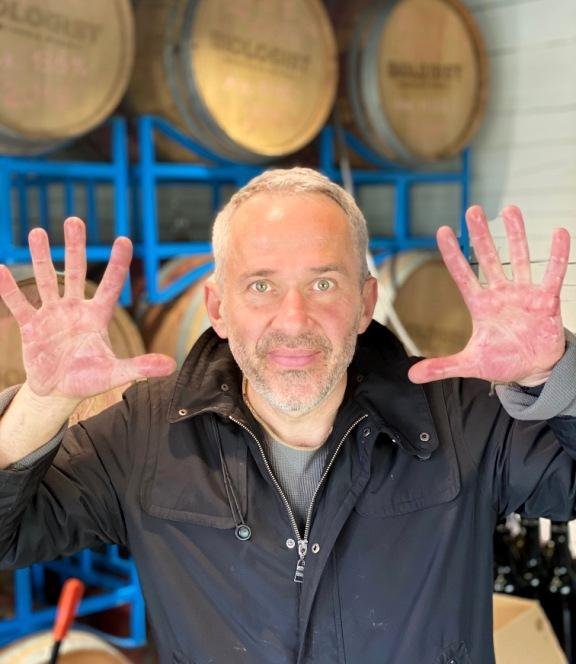 Whenever he can make it, Igor Petrenko travels along the wine routes, this is always a [good] experience. “When occasion offers, I go to France or Italy to exchange experience and gain new knowledge,” – the winemaker says. “It’s never too late to learn!”

The main goal of Biologist craft winery is the development of the culture of consumption of natural craft Ukrainian wine. It should become fashionable to drink Ukrainian wine!

Oh, we nearly forgot to mention – if you’ve already enjoyed your visit to Biologist craft winery, make sure that your friends do not fade from your memory. At the winery, you can purchase a gift certificate for a visit to Biologist.

Winery Honcharna Hora
Opening soon of our website in English